The Saudi story on Khashoggi’s ‘accidental’ murder creates more questions than it answers. Here are the top 7 questions they still have to answer.

The fiancée of Saudi journalist Jamal Khashoggi has said Saudi authorities are responsible for his murder, and the kingdom should give more details so that those who ordered and carried out the killing can be brought to justice.

When asked who was ultimately responsible for the killing, his fiancée, Hatice Cengiz, told Reuters in Turkish: “This took place inside a Saudi diplomatic mission … In such circumstances, the Saudi Arabian authorities are responsible for this.”

“This incident, this assassination, took place in the Saudi consulate,” she said, speaking through a translator. “So the Saudi authorities probably know how such a murder took place.”

“They need to explain what happened,” said Cengiz, who was sombre, guarded and appeared at times on the verge of tears.

While the Saudi story on Khashoggi’s disappearance left many questions unanswered, the new Saudi prosecutor looking at the death to expected to give more of the same.

“The prosecutor, who was hired by MBS, cannot say anything without the permission of the prince. He is like a ring on MBS’s finger. So all things he has said are futile,” said an individual close to royal circles in Saudi speaking to the Independent.

Saudi Foreign Minister Adel al Jubeir, the first Saudi official on record to call the killing a ‘murder’, did not set the record straight, only denying official knowledge or involvement of Crown Prince Mohammed bin Salman in the journalist’s killing.

He may have even unwittingly implicated the Kingdom and the Crown Prince further.

“There weren’t people closely tied to him who were involved in this operation. There were pictures of some security officers who may have been in his security detail…but this is normal, people who deal in security details rotate…so having somebody in a picture does not imply that they are close at all,” he said, in response to alleged links between the 15-man team implicated in Khashoggi’s death.

But members of the 15-man hit squad included Saudi Royal Guard members, who exist outside the normal chain of command, and take orders only from the king and his son.

“It’s inconceivable that an operation using royal guards, other court officials and the consulate was not authorized by the crown prince,” says Bruce Riedel, a senior fellow at the Brookings Institution.

The question remains, why would senior intelligence and royal guard members take part in an international operation of this scale if they did not believe they had the full backing and support of the prince or king himself?

More critically, this is entirely at odds with the MBS’s rise to power in early 2017, when he replaced Mohammed bin Nayef, former Minister of Interior and head of Saudi Arabian intelligence.

This included reshuffling and restructuring the Ministry of Interior and Defence to report exclusively to him.

Furthermore, how could MBS have had no idea of the operation, if King Salman himself put his son in charge of a ministerial committee to restructure the top command of the country’s intelligence services?

Upon assuming power, the young crown prince was quick to install a new guard of largely western-educated loyal technocrats in nearly every state ministry, with no ties to previous tribal or royal power structures in the kingdom. 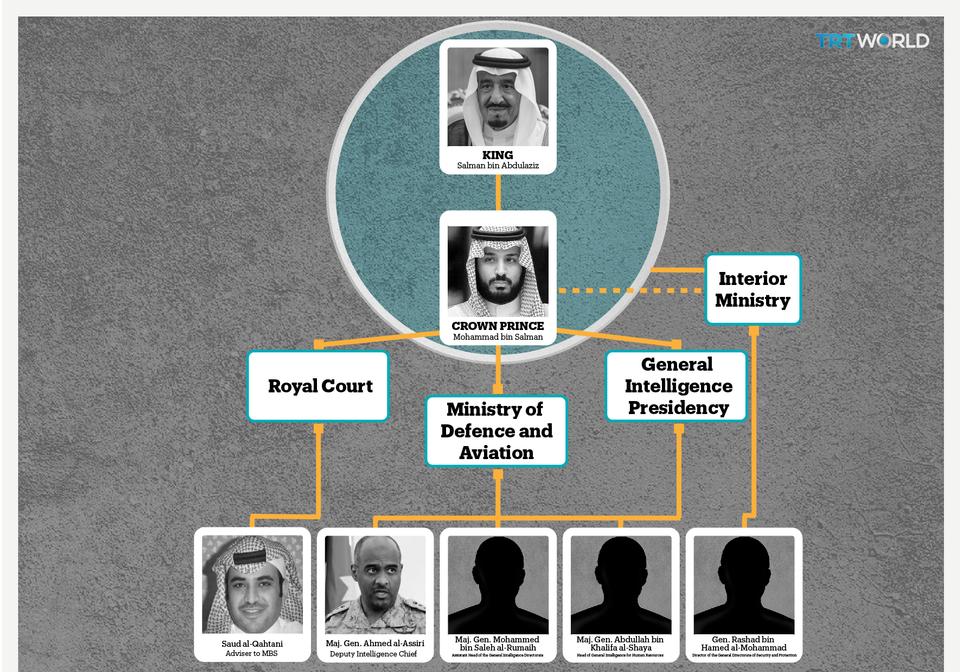 2) Adel al Jubeir was also quick to note that the kingdom had no history of assassination or abduction, but when fact-checked, this claim is found to be false.

In reality, Jamal Khashoggi is not the first Saudi in exile to ‘disappear’.

Few remember exiled Nassir al Said who ran an opposition radio programme and disappeared from Beirut in 1979, never to be found.

Here are a few others:

This is only one among many questions that need answers.

3) Does Saudi Arabia deny knowledge of the operation or was it part of an ‘extraordinary rendition’?

In a further attempt to deflect blame away from MBS, Saudi officials claim there is a standing order that requires officials to “bring back” Saudi opponents in exile, while arguing that the 18 arrested individuals exceeded their authorities.

MBS, according to an official quoted by Reuters, was aware of the standing order but not of the operation.

This contradicts claims that there is no precedent for the behaviour of ‘rogue agents’, distanced from the crown.

If the Saudi admission to Khashoggi’s murder was part of a reasonable attempt to shed light on the truth of his death, it has yet to provide a convincing narrative and chain of events. This begins with the young crown prince himself.

Robert Jordan, former US ambassador to Saudi Arabia has called this story to account, expressing “serious reservations” about MBS’s leadership.

He lists what he calls ‘failures’ under his tenure.

“If you look at the track record of the Crown Prince, he’s presided over one failure after another over the last two years — the war in Yemen, the detention of the Lebanese Prime Minister, the blockade of Qatar…you can go down the line and one would ask, if this fellow was applying for a job, what administration would hire him, or give him a promotion.”

4) Why did the official Saudi Arabian recognition of the murder fail to mention the existence of a “body-double”?

In a breaking discovery, Turkish security footage found video showing a man who attempted to impersonate Khashoggi by wearing his clothes and leaving the embassy, only to enter a washroom and throw the clothes away afterwards.

5) Where is Khashoggi’s body?

When Saudi officials admitted Khashoggi had been killed it in its consulate, they gave no information of where his body was taken after the murder. They also made no mention of reported details that Khashoggi’s body was cut into several pieces.

The Saudi Press Agency reported that 18 people were arrested in links to Khashoggi’s death, with no mention of names or titles. Five other senior officials were fired, with close ties to Crown Prince Mohammed bin Salman.

Those include one of the prince’s closest advisers Saud al Qahtani, who tweeted last year: “Do you think I can act by myself without taking orders/guidance?” he wrote. “I am an employee and a trustworthy executive to the orders of the king and the crown prince.”

More critically, why was the young crown prince’s right hand man fired for an ‘accidental fight’ that lead to Khashoggi’s death, if it was truly operated by rogue agents?

7) If the goal was ‘rendition’ and not murder, why was Khashoggi interrogated in Istanbul, and why was a chief forensics expert part of the 15-man team sent to deal with him.

The list of unanswered questions only continues to grow, as the world waits on a believable explanation from Saudi Arabia for Jamal Khashoggi’s disappearance.

As the investigation closes in on what happened to Khashoggi, what will the repercussions be?