Russia demands access to poisoned former spy and daughter to ensure they do not want help. 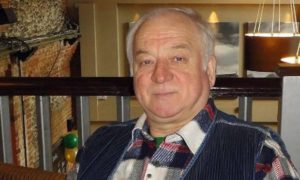 Moscow has demanded a meeting with Sergei Skripal, the Russian former spy poisoned by a nerve agent in Salisbury, following his discharge from hospital.

Vladimir Putin said he was pleased Skripal had been released from hospital on Friday, more than 10 weeks after the poisoning, and wished him well.

“God grant him good health,” the Russian president said. “If a military-grade poison had been used, the man would have died on the spot. Thank God he recovered and that he left [hospital].”

Russia’s ambassador to London, Alexander Yakovenko, also welcomed Skripal’s release, but claimed the UK would be breaking international law if it did not allow access to him and his daughter, Yulia, who was also poisoned and was discharged last month.

Yakovenko said nobody actually knew if the pair were alive and suggested that, if they were, they may have already left the country. Scotland Yard made clear that no details of the security arrangements for the pair would be given.

Salisbury district hospital announced on Friday morning that Skripal had been discharged.

The chief executive, Cara Charles-Barks, said it was good news that Skripal was well enough to be discharged.

“That he, Yulia and DS [Nick] Bailey have been able to leave us so soon after coming into contact with this nerve agent is thanks to the hard work, skill and professionalism of our clinicians, who provide outstanding care to all our patients, day in and day out,” she said.

“This has been a difficult time for those caught up in this incident: the patients, our staff and the people of Salisbury. I want to thank the public for their support, and I want to pay a special tribute to both the clinical staff here at the trust and those who work so hard behind the scenes. They’ve demonstrated the very best of the NHS.”

The hospital added: “While these patients have now been discharged, their right to patient confidentiality remains and limits us from giving detailed accounts of the treatment these individuals received.

“However, treating people who are so acutely unwell, having been poisoned by nerve agents, requires stabilising them, keeping them alive until their bodies could produce more enzymes to replace those that had been poisoned.”

At a press conference at his official residence in London, Yakovenko said Russia wanted access to the Skripals “just to understand how they feel and for them to say personally what they want. We are not asking for anything extraordinary. We are asking for the UK to comply with the law.”

He said: “It is not just a question of our bilateral relations but international law through the Vienna convention 1965.

“Nobody has seen their pictures, heard their voice and whether they are alive. It is fine for us if they say they do not want our services.”

He said he had the impression, based on conversations with UK security services “that we will never see them”, and called on the British press “to be a bit more active and ask to see them. They may not be in this country.”

Yakovenko said the reputations of both the UK and Russia were at stake due to the British allegation that Moscow was responsible for the poisonings. “We do not have any official version of what happened. We do not have any access to the investigation. We have to rely on press leaks,” he said.

Russia has requested consular access to Yulia Skripal twice since her recovery. Britain told Russia formally she had chosen not to take up its offer of help, but Yakovenko said she was isolated, and Russia required personal assurances from her that she did not want its help.

The ambassador said he had never heard of Sergei Skripal prior to his poisoning.

A UK government spokesman said it was very welcome news that hospital staff have deemed Sergei Skripal well enough to be discharged from hospital.

“Their ongoing recovery is testament to the hardworking and talented NHS staff, who have also continued to serve their community so well during this period – and will carry on doing so.

“But let’s not forget, the fact that all three victims of this incident have been discharged from hospital does not alter the fact this was a brazen and reckless attack – attempted murder – using an illegal chemical weapon.”

Counter-terrorism police, who continue to lead the criminal investigation, said they would not be discussing the security arrangements for the Skripals.

A Scotland Yard spokesman said: “This is a complex investigation and detectives continue to gather and piece together all the evidence to establish the full facts and circumstances behind this dreadful attack. In the interests of Sergei and Yulia’s safety, we will not be discussing any protective or security arrangements that are in place.”

The Skripals collapsed on a park bench in Salisbury on 4 March after being exposed to novichok, most likely at Sergei’s home on the outskirts of the city.

Later that month, a high court judgment emerged suggesting they had little chance of recovery. The judgment from Mr Justice Williams said: “… medical tests indicate that their mental capacity might be compromised to an unknown and so far unascertained degree”.

Williams said Sergei Skripal was unable to communicate at all and his daughter could not communicate in any meaningful way. “It is not possible to say when or to what extent Mr or Ms Skripal may regain capacity. Both are currently in a physically stable condition which is not expected to change in the immediate or near future.”

However, their recovery appears to have been helped by the proximity of the hospital to the defence research laboratory at Porton Down.

Yulia Skripal’s faster recovery could have been because she suffered less exposure to the nerve agent or because she is younger and fitter than her father.

Bailey, who was poisoned when attending the pair, was released three weeks before Yulia Skripal. He said at the time that he did not expect “normal life” to resume.

It will be the same for the Skripals, who will be offered protection for the rest of their lives. There have been reports that they may be granted settled status in another country, such as the US or Australia, though the Russian embassy has claimed this would amount to abduction or forced isolation.

Meanwhile, Skripal’s home remains a sealed-off crime scene and decontamination work at sites linked to the attack is continuing.