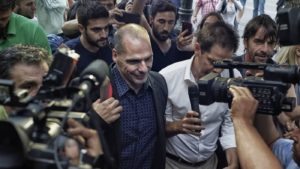 Yanis Varoufakis, center, when he was Greece’s finance minister in 2015. His new book is ‘Talking to My Daughter About the Economy, or How Capitalism Works — And How It Fails’ (Milos Bicanski / Getty Images)

Have you noticed how angry everyone is? Turn on the news or scroll through your social media feed, and you’ll see a kaleidoscope of rage. People are relitigating the last election or freaking out about Russia; screaming about porn stars, the climate and gun culture run amok. They are angry about the lack of accountability in government, in the workplace, in their sex lives. I’m not suggesting this anger isn’t justified, that the frustrations of millions are unearned, because believe me, they are. I’m right there with them. But it’s not like past episodes of collective anger, when people would unite and protest a war or a terror attack or a sports team from Boston; this current multi-directional rage-splatter has become a diffuse, all-enveloping red mist. If John Lydon is right, if “anger is an energy,” we could probably power every light on earth. But what can we do with it?

Greek economist Yanis Varoufakis has some thoughts about where to direct this energy, and he sets them down in a charming and utterly fascinating letter to his 14-year-old daughter entitled, “Talking to My Daughter About the Economy Or, How Capitalism Works — And How it Fails.”

His previous book, “Adults in the Room: My Battle with the European and American Deep Establishment,” is a memoir of his short-lived position as Finance Minister of Greece in 2015 and his attempt to end the austerity program imposed on his country by “The Troika” composed of the International Monetary Fund, the European Central Bank and the European Commission.

His principled stand against these forces, and the backlash that ensued, is as epic and harrowing as anything recounted by Homer. I found it difficult to read his account of the rampant corruption and cronyism among the international banking community and Western governments without occasionally uttering a word not fit for a family newspaper but one that fans of actor Samuel L. Jackson will be familiar with.

In his new book, Varoufakis tells the story of the economy: how it started, how it works and how we might be able to curb its excesses and abuses. It’s a sharp analysis mixed with philosophical rumination told in a breezy mix of family anecdotes, Greek myth, world history and a surprisingly deep dive into the hidden meanings embedded in “Star Trek” and “The Matrix.”

I am not an economist and lucky for me this is not a book written for economists, it’s a book for everyone. Varoufakis dispenses with technical jargon, and when he does use it, he goes to great lengths to clearly define what he’s talking about. He begins by looking at the changes a society goes through when they begin to produce a surplus of, for example, food. “Bureaucracies and armies were made possible by agricultural surpluses, which in turn created the need for bureaucracies and armies.”

From these beginnings, Varoufakis leads his daughter — and us —through the machinations of a market society; the importance of debt; how the banking system borrows from the future to profit in the present; the birth of the labor market; arbitrage; and the delicate interplay between inflation, deflation, unemployment, state debt and how a workers wages are recycled through the economy. If you’re like me and these words typically make your eyes glaze over, Varoufakis makes them engaging. And he doesn’t stop with simple explanations, he goes deeper, looking at the emotional and psychological effects that a market society has on its citizens.

One of the more compelling arguments in the book is his explanation of experiential values — a walk on the beach, a dinner with friends — versus exchange values, a commodity that can be sold. “A dive, a sunset, a joke: all can have an enormous amount of experiential value and no exchange value whatsoever.” Varoufakis warns, “Anything without a price, anything that can’t be sold, tends to be considered worthless, whereas anything with a price, it is thought, will be desirable.” Of course, Facebook and other social media outlets have found a way to monetize our family photos, our vacations and our private lives. Now a dive, a sunset, a joke has an exchange value. Does the monetization of everything erode our humanity? “Our market societies manufacture fantastic machines and incredible wealth, astounding poverty and mountainous debts, but at the same time they manufacture the desires and behaviors required in us for its perpetuation.” This is where he gets at what’s meaningful about human existence and how the economy affects us all.

The economy touches every aspect of our lives and yet we typically leave it to bankers, financiers and economists. Varoufakis sees that as a mistake. “Leaving the economy to experts is the equivalent of those who lived in the Middle Ages entrusting their welfare to the theologians, the cardinals and the Spanish inquisition. It is a terrible idea.”

And what about that anger I mentioned at the beginning of this piece? Almost all of the problems enraging people on both sides, Varoufakis says, stem from income inequality, corporate greed and other issues that are deeply embedded in the economy and the perpetuation of the status quo. If we’re going to direct our anger toward solving problems, then this book is a good place to start. As Varoufakis says in the prologue, “Ensuring that everyone is allowed to talk authoritatively about the economy is a prerequisite for a good society and a precondition for an authentic democracy.”

That authentic democracy is what he’s pushing for. He isn’t advocating for socialism or the destruction of capitalism. As he says, it doesn’t matter which system you use: “All systems of domination work by enveloping us in their narrative and superstitions in such a way that we cannot see beyond them.” What he is suggesting is that we take a step back, allowing some distance and humor into our thinking, and channel our anger into creating a market society that is more humane and more equitable, so that the few don’t enjoy the wealth of the world at the expense of the many.