AS the prince hosted visitors on his first day in the world, we now know what his doting parents said as they posed for photos.

New parents Kate and William did not have long after the birth on their second son before they were in front of the paparazzi. Picture: AFP Photo / Daniel Leal-OlivasSource:AFP

NOT many babies experience so much fanfare on their first day in the world — but the new royal is preparing for a highly unusual life.

Today, the little prince received visitors including Pippa Middleton and Princess Eugenie, as his tired-looking father Prince William was seen driving out of Kensington Palace while mum Kate stayed at home with the kids.

The birth was marked by bell ringing at Westminster Abbey, a 41-round gun salute in London’s Hyde Park at 2pm Tuesday local time and a 62-round salute at the Tower of London.

Pippa was among the little prince’s first visitors, looking cheerful as she drove into the palace in a baby pink turtleneck, coat and sunglasses. Kate Middleton’s 34-year-old sister is expecting her first child with her hedge fund manager husband James Matthews.

The Duke and Duchess of Cambridge show off their new baby outside the Lindo wing of St Mary’s Hospital in London. Picture: Neil Warner/MEGA TheMegaAgency.comSource:Mega

The new baby’s pregnant aunt, Pippa Middleton, was one of the first to arrive at Kensington Palace to meet her new nephew. Meghan Markle and Prince Harry live in the palace grounds. Picture: Jack Taylor/Getty ImagesSource:Getty Images

The Prince of Wales on Tuesday said in a statement that “it is a great joy to have another grandchild, the only trouble is I don’t know how I am going to keep up with them.”

When William eventually takes over the title, if Prince Charles ascends the throne as expected, the new baby will also be Prince X of Wales.

The newborn Prince of Cambridge is as yet unnamed, and speculation over the possible name is reaching fever pitch. While he was born on St George’s Day, his four-year-old elder brother is already named after the patron saint of England.

Arthur is now the favourite with the bookmakers, with Ladbrokes putting the name at 5/2 with James at 4/1, Albert at 5/1, Philip at 6/1 and Alexander at 10/1. Traditional royal names Frederick, Henry, Edward, Michael and Thomas are also in the running.

His Royal Highness spent his first full day in the world surrounded by family and friends, as the world waits with bated breath to learn more about the tiny prince.

Meanwhile, lip-readers told The Mirror what Kate and her husband murmured to each other as they posed with their third child for his first photographs.

“Are you OK with him?” the Duke of Cambridge, 35, asked the Duchess as she walked down the hospital steps in stilettos, just hours after the birth.

They then prompted each other to wave in different directions, before Kate told her spouse: “It is a bit windy, he might get cold, let’s go now.” 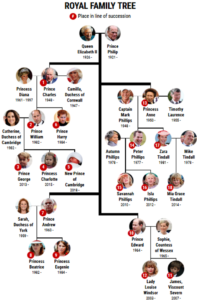 The youngest member of the monarchy was born in the private Lindo wing of St Mary’s Hospital in central London, with a crowd of hundreds waiting outside. Some had been camped outside the hospital for two weeks.

The little boy’s parents William and Kate are one of the most famous and influential couples in the world, but would have seemed like any other doting mother and father to the newborn, who arrived safely on Monday morning UK time.

But the royal machine soon swung into gear, as the Duke of Cambridge braved the cameras to bring the prince’s older brother and sister — Prince George of Cambridge and Princess Charlotte of Cambridge — to meet him and see his mother, the Duchess.

The young Prince X of Cambridge was born at 11.01am weighing 3.8 kilograms, and a glowing Kate faced the media less than seven hours later. Picture: AFP Photo / Isabel InfantesSource:AFP

Onlookers were taken with the Duchess’s apparent sartorial tribute to her late mother-in-law Princess Diana, who wore a similar outfit after giving birth to Prince Harry in 1984. Picture: Phil Loftus/Capital Pictures / MEGA TheMegaAgency.comSource:Mega

Within seven hours of the little prince’s birth at 11.01am local time, his mum was glammed up by a professional stylist and slipped into nude heels and a shift dress for his first taste of the cameras. She wore a red dress with white collar by British designer Jenny Packham, believed to be a tribute to the prince’s late grandmother Princess Diana.

Swaddled in a white lace shawl, the 3.8 kilogram baby had no knowledge of the extraordinary excitement and delight at his birth sweeping the world as the shutters clicked for his first newspaper front pages.

The baby prince snoozed through the drama as he was placed in the royal Range Rover on Monday evening and driven home to Kensington Palace. Picture: AFP Photo / Ben StansallSource:AFP

Prince George, 4, and Princess Charlotte, 2, stole hearts as they were led into the hospital by their father Prince William to meet their new bay brother. Picture: AFP Photo / Daniel Leal-OlivasSource:AFP

Hundreds of well-wishers and media crowded the street outside the hospital ahead of the birth. Picture: AFP Photo / Daniel Leal-OlivasSource:AFP

A town crier announces the news of the birth of a healthy baby boy to Catherine, Duchess of Cambridge outside the Lindo wing. Picture: AFP Photo / Ben StansallSource:AFP

A waxwork of the Queen appeared outside the hospital in a black cab in a bizarre prank. Picture: AFP Photo / Isabel InfantesSource:AFP

“We didn’t keep you waiting too long this time,” said his beaming father William telling the media he and Kate were “very happy” and “delighted”, but adding that they had “thrice the worry now” as he held up three fingers.

As for the baby’s name, he told the press, “You’ll find out sooner or later.”

The couple then headed back inside the hospital before placing his car seat in the royal Range Rover and taking him home to Kensington Palace to join George and Charlotte.

The little prince is now fifth in line to the throne, bumping his uncle Prince Harry from the spot but not usurping his older sister, for the first time in history after the Succession to the Crown Act was passed in 2013, ending male primogeniture in the Royal Family for those born after 2011.

Charlotte and George’s names were announced within a day or two of their births respectively, although William’s took a week and his father Charles’s name wasn’t revealed for a month.

A large Union Flag has been raised over Buckingham Palace and a State Standard over Windsor Castle to mark the birth of The Duke and Duchess of Cambridge's third child. pic.twitter.com/hcYYluf2fF

The wider royal family is also thrilled at the news, with Kensington Palace yesterday releasing a statement saying: “The Queen, The Duke of Edinburgh, The Prince of Wales, The Duchess of Cornwall, Prince Harry and members of both families have been informed and are delighted with the news.”

The pomp and circumstance began with a notice announcing the birth placed in the forecourt of Buckingham Palace a large Union Flag (aka Union Jack) raised over the Palace and a State Standard over Windsor Castle to mark the occasion.

The Duke and Duchess of Cambridge thanked the staff at the hospital for the care they received and “everyone for their warm wishes.”

This Dog Was Chained Up for 5 Years and Left To Die… But Now, He’s All Smiles!

These six photos are competing for a top photojournalism prize