Human Rights Watch report says Lebanese municipalities have expelled hundreds of Syrians from their homes since 2016. 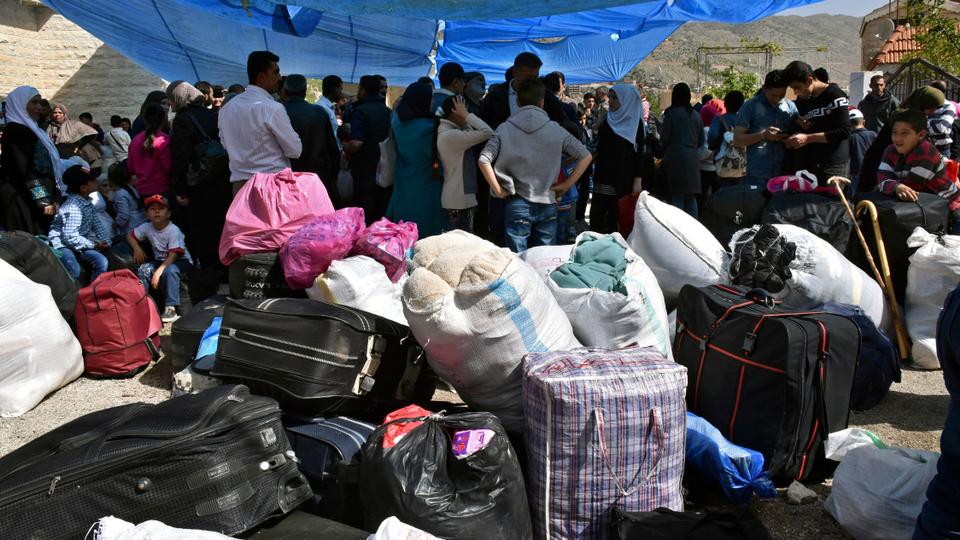 Displaced people who fled the Syrian war stand next to their belongings near the Lebanese-Syrian border as they prepare to return to their village of Beit Jinn in Syria, in the southern village of Shebaa, Lebanon, on April, 18, 2018. (AP)

Human Rights Watch (HRW) on Friday criticised Lebanese municipalities for what it called the unjustifiable expulsion of thousands of Syrians from their homes since 2016, as sentiment against refugees simmers.

“At least 3,664 Syrian nationals have been evicted from at least 13 municipalities from the beginning of 2016 through the first quarter of 2018 and almost 42,000 Syrian refugees remained at risk of eviction in 2017,” said the global rights watchdog in its report “Our Homes Are Not For Strangers.”

HRW quoting Lebanon’s social affair’s ministry said the Lebanese army evicted another 7,524 people in the vicinity of the Rayak air base in the Bekaa Valley in 2017 and 15,126 more Syrians near the air base have pending eviction orders.

Almost one million Syrians are registered as refugees in Lebanon, though many expect the real number is much higher.

The Mediterranean country’s population stood at just four million before neighbouring Syria’s civil war broke out in 2011, sending tens of thousands of Syrians fleeing across the border in search of safety.

Several politicians have blamed a flurry of social and economic woes in Lebanon on Syrian refugees, and calls for them to return have increased in the run-up to the country’s first parliamentary elections in nearly a decade on May 6.

“Municipalities have no legitimate justification for forcibly evicting Syrian refugees if it amounts to nationality-based or religious discrimination,” said Bill Frelick, refugee rights director at HRW.

“Lebanese leaders should curb rhetoric that encourages or condones forced evictions, expulsions, and other discriminatory and harassing treatment of refugees in Lebanon,” Frelick said.

The evictions have caused refugees to lose income and property, and their children to miss school or drop out altogether, according to the HRW report, which was compiled on the basis of interviews with 57 Syrians affected by the measures.

Some municipalities have claimed the evictions were based on housing regulation infractions such as tenants not registering their leases with them, the report said.

The Lebanese government’s has not commented on the HRW report yet.

‘We don’t want you here’

“They cursed us and said, ‘You must leave Mizyara, we don’t want you here,'” Sameh, a Syrian refugee from Hama who had been living off and on in Lebanon for more than 13 years, told the HRW investigators.

“They immediately began beating us. They punched me in my face, my head, my back.”

Refugees said the municipality of Bcharre issued a circular saying, “our homes are not for strangers” and went on to forbid Lebanese landlords from renting apartments to Syrian families and demanded that Syrians vacate the homes where they were residing.

“There was no court, no judge, no legal procedure,” said Hafez, a 57-year-old long-time resident of Hadath, who said that all his papers were in order at the time of his January 2018 eviction.

“The [municipal] police did not accuse me of illegal residence because I am a legal resident. They just said, ‘You have to leave or we will put your stuff on the street.’ They came every week, then every day, then twice a day.”

But despite “widespread breaches by Lebanese citizens as well, the measures these municipalities have taken have been directed exclusively at Syrian nationals and not Lebanese citizens”, HRW said.

HRW also pointed to discrimination on a religious basis, with most of the municipalities involved in forcibly evicting and expelling Syrian refugees predominantly populated by Christians.

All 57 interviewees who spoke to HRW identified as Muslim.

But, said HRW, “Lebanon’s refugee-hosting fatigue has been exacerbated by a lack of international support” as well.

Syria’s seven-year bloodletting has left around 450,000 killed. More than 11 million people – about half the country’s pre-war population – have been displaced from their homes, including over five million who are living as refugees outside Syria, according to the United Nations.

The UN has estimated the material cost of the war damage at close to $250 billion.