‘Christ was the first exorcist’: priest reports rising demand for the ritual

Mexican priest who is teaching the ancient rite in Rome says it still has a place in the modern Catholic church. 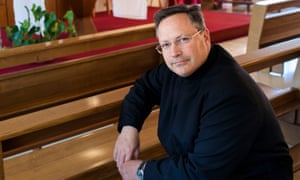 Father Cesar Truqui has never seen a person levitate, but he knows another priest who has.

In his decade working as a Roman Catholic exorcist, expelling demons from individuals who he believes are possessed or vexed by the devil, the Mexican priest says the oddest thing he witnessed was the sudden appearance of a “satanic nail” on a tabletop.

“There had been nothing on the table and then suddenly it was there, a rusted black nail. We all saw it. I wanted to keep it but then I thought, no, it’s like keeping a radioactive thing,” he said.

Truqui, who is based in Switzerland, served as an assistant to the late Father Gabriele Amorth, a famous exorcist who claimed to have performed more than 100,000 exorcisms. Truqui is heading to Rome this month to teach a new course on exorcism for priests who want to learn the ancient rite, which he says is rooted in the Gospels.

“Christ was the first exorcist,” says Truqui. “The power of casting out demons was one of the signs that Christianity was a true religion.”

These days, most faithful Catholics believe the idea of expelling demons is antiquated. While Pope Francis has spent more time talking about the devil than other modern popes – and reportedly once performed an impromptu exorcism – he has only rarely discussed the ritual.

Yet demand for exorcism is on the rise, Truqui says, as more bishops around the world, who were once sceptical about the practice, have come to see it as a possible solution to their parishioners’ problems, especially in cases where they believe modern medicine and psychiatry have failed.

But how does a practice that is synonymous with a horror movie, and which is steeped in the supernatural, have a place in the modern church, even as it condemns people who dabble in so-called “black magic”?

A still from the 1974 film The Exorcist showing Hollywood’s take on the Christian ritual. Photograph: PA

While exorcism has been criticised for stigmatising and possibly harming individuals who suffer from mental illnesses or physical ailments that might be difficult to diagnose, and despite some high profile cases of abuse by exorcists, Truqui claims the “patients” he sees find peace in the process.

“At the end of the exorcism, there is always relief,” he says.

His subjects, he says, have problems that cannot be explained in normal medical terms. One, who he believes may have been cursed by her mother-in-law, feels an almost constant sensation of daggers entering her legs, knitting needles in her arms, and a clenched hand at her chin. Another was so obsessed by self-gratification that he masturbated 40 times a day. “Normally speaking it is humanly impossible … so that is a satanic thing,” says Truqui.

Despite what Hollywood would have us believe, Truqui says full-on demonic possession is very rare. The vast majority of people who see him have normal problems or mental illnesses, and he says he has sent people to seek psychiatric help. But he says 2-3% show signs of demonic “vexation”.

These people, he claims, are capable of feats of superhuman strength. Sometimes their voice changes and they growl or speak in tongues. He claims to have witnessed people with vexations who can suddenly speak in Hebrew or Aramaic even though they have never studied the languages. Some are obsessive and show knowledge of what Truqui calls “secret things”, like what a person who is not present is doing or wearing, and they are sometimes overwhelmed by feelings of discomfort when they are in places of worship.

“Most of the time, the people who see me are victims,” he says.

Truqui also spoke at length about Satan, who he described as a pragmatic foe. “The devil tempts the holy man in his holiness and the sinner in his sin,” he says.

While he is at pains to point out that he does not believe Pope Francis is possessed or vexed by the devil, he says that the devil would know that Francis would not be tempted by lust for a woman. Instead, he would prey on Francis’s sympathy for the poor, and tempt him to ignore the affluent.

The process of exorcism itself, he says, is relatively boring, compared with the Hollywood version: an exorcist puts his hand on a person’s back or head, and begins by reciting the Lord’s Prayer. A vexed or possessed person, Truqui says, might then start speaking for the devil.

He recalled one case that gave him pause: “[The subject] said ‘I am the prince of this world, I am Satan’, and the hairs on my arms went up. When you listen to a satanic growl, once you listen to the devil’s voice, you can recognise it.”