The Mexican director was crowned best director for his fantasy romance ‘The Shape of Water,’ at the Directors Guild of America honours. 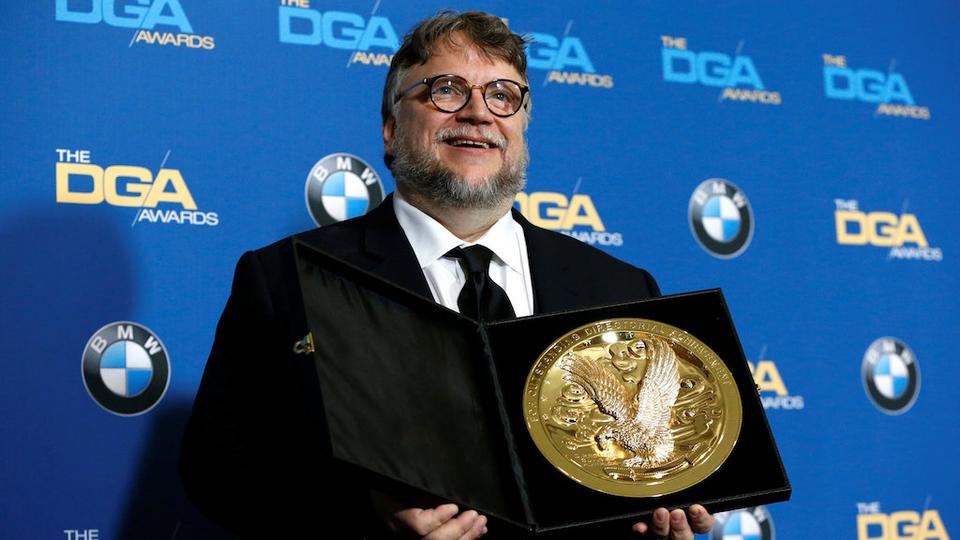 Director Guillermo del Toro holds his award for Outstanding Directorial Achievement in Feature Film for “The Shape of Water” at the 70th Annual DGA Awards in Beverly Hills, California, US, February 3, 2018. (Reuters)

Hollywood director Guillermo del Toro won the best film director of 2017 for “The Shape of Water” on Saturday, placing the Mexican filmmaker and the film in a strong position for the movie world’s top honours, the Oscars, in March.

The Directors Guild of America (DGA), the leading industry group representing film and television directors, chose Jordan Peele as best first-time feature film director for the offbeat horror film “Get Out”, which has four Oscar nominations including best picture and for Peele as best director.

DGA feature film winners have often gone on to claim the best director Oscar and even see their films win best picture.

The Oscar chances for “The Shape of Water” were also boosted last month when the Producers Guild chose it as the year’s best film.

It was del Toro’s first DGA win and his first nomination.

“The Shape of Water” scored 13 Oscar nominations last month, the most of any 2017 film and just one shy of the all-time record of 14, including best picture and del Toro as director.

Peele was also nominated by the DGA at its 70th annual honors for best feature film director, as was Greta Gerwig, for “Lady Bird”.

Gerwig, also an Oscar nominee, would be only the second woman to win the best director Academy Award.

Matthew Heineman was honored as best documentary director for “City of Ghosts”, a British film about rebels banding together to fight Daesh in Syria.

The Oscars will be handed out in Hollywood on March 4 to producers, directors and actors in a star-studded television show viewed around the world and among the most-watched TV programs in the United States.

In addition to film directors, the DGA also handed out television honors, with women directors taking two of the top awards.

Directors of “Big Little Lies”, “Saturday Night Live” and the 89th annual Academy Awards presentation also won their categories, the latter show going down in infamy when the wrong film was announced for the top award, best picture.

British director Michael Apted, known for the “Up” documentary series which revisits children every seven years as they progress into middle age and beyond, was honored with a special lifetime achievement award at the gala ceremony hosted by Judd Apatow.